"Move If You Wanna" 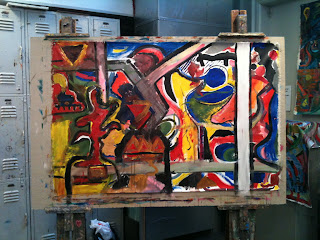 Ok, I just came from a most energizing, energetic, and exhausting (painting) experience I've had in a while!

You are looking at the results of my taking part in the Tunisian Collaborative Painting Workshop at the League. You can read all the wonderful details and origins of this painting method on the official website using the link above.

David Black was GREAT in explaining everything to us. He was totally cool and came off a little bit to me like a cool priest :) Anyway, there were 6 artists (including me) working as a group (yay Group2!) on one canvas AT THE SAME TIME.

Interestingly enough, everything worked out pretty smoothly. Our first collaboration is above ("Move If You Wanna"). I have to admit that about "halfway" thru the painting I was worried that it looked like two distinct paintings on one canvas. I did, however, have a strategy going into the first one. I basically stepped back from it, saw the colors/shapes that were being laid down, and brought the forms out using black. So that's what I kept doing. Filling in the spots with big color shapes (yellow, pink) and then finding form with black. I also tried to unify the painting with elements that transverse the canvas. We voted as a group when we thought the painting was done. I just kept stepping back and going in, finding form, adding big sections of color -- it reminded me of the Basquiat/Warhol collaborative paintings. It came out pretty cool I think!

During the discussion break I noticed that there were pieces of the painting that I wanted to "fix" but couldn't and I would just have to accept it. Also, one of my group members turned out very frustrated and non-freeing which was the opposite feeling of the majority. But it did feel freeing to me. I could just step back and react to shapes and colors that were being put up in the moment. It was so cool!

Ok, for the next painting I knew that I wasn't going to be using black because that had been done in the first, so I didn't really have a plan or goal. I stepped back a lot more and just looked at what my group members were doing. I actually started out by writing non-related letters, like "XVZ" and smilies "=[" but they eventually got painted out, which didnt bother me at all. I wanted to unify the painting so I put in the series of circles that again transverse the painting. I started to notice some of the elements that other group members were painting and tried to replicate them myself. An example of this is the triangles evident in the middleish of "Move If You Wanna" and on the right column of "Stepping Stones" below. The group member that was initially inhibited in the first painting (she felt better in the second one) put these on. So when I saw her put them on again in the second painting I replicated them into the column that you see. I think they were really great in the second and gave us a great structure to help us look at the entire work.

Stepping back and looking at these paintings, it does seem like only one artist painted them which is interesting. Also, I really like that our paintings look different from each other. "Move If You Wanna" is more structural while "Stepping Stones" is more organic. I'm not laying any judgment there, just making an observation.

We painting for 4 hours and came up with these paintings. It was great. I wish I could do this every couple of weeks! AND this has actually gotten me to revisit my abstract work. Abstracts have always mad more sense to me intuitively. I was looking at my unfinished abstracts and I think I want to approach them in this more freeing method. I kept thinking "no hesitation" like Picasso in "The Mystery of Picasso". 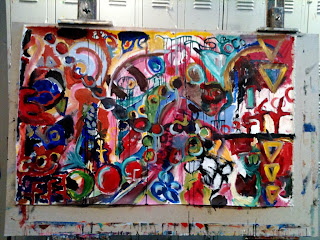 Email ThisBlogThis!Share to TwitterShare to FacebookShare to Pinterest
Labels: abstract

Great post, Rudy. Nice to hear some post-painting feedback - when there's been some more time to reflect on the experience. Looking forward to seeing your video. - Holly