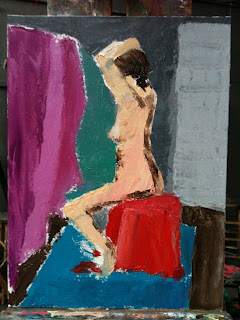 We were not allowed to paint with brushes at all today. The painting had to be completed with a palette knife only. I set out to get the figure right, pretty much like the geometric color study. But then I could hear MCK telling people that they had to put more color in their studies (the monitors have set up a series of colorful backdrops for each model).

So since I hadnt done much yet, I restarted by painting in the red stool. When MCK came over she explained the she wanted at least 5 major colors in the study. If I got the surrounding colors right, the model would become easier to get. Until then I had totally thought to focus on the model, but she said the point of the exercise was to see how the surrounding colors create the shape that we perceive as the model. So cool!

So here it is, 5 colors like MCK ordered. I wouldve liked to get a bit more nuance in each of the major shapes, but what the hell.

By the way, cleaning up without using brushes was fuckin great!
Posted by rudy at 9:13 PM