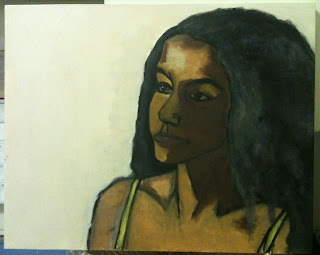 Ok at this stage the likeness is the most accurate it has been, but I am frustrated because it wont be done in the time we have to work on this painting :(

So I ended up having to take a bunch of pix with my iPhone as reference so that I can finish it back in NYC. I am totally tenuous about this endeavor but have to make do...Actually looking at the painting now, I don't hate myself as much as I did.

Post Script:
Airport security was most kind when handling the painting -- "I'll make sure it doesn't get scratched" they conveyor belt guy said. How nice, right? Also, the people on the other end said "wow you did that?" to which I responded that it totally wasnt done yet before the other person said "I would buy that."

This was all a great boost and set me at ease for the flight that had me most nervous =)
Posted by rudy at 2:01 AM

Email ThisBlogThis!Share to TwitterShare to FacebookShare to Pinterest
Labels: fieldwork