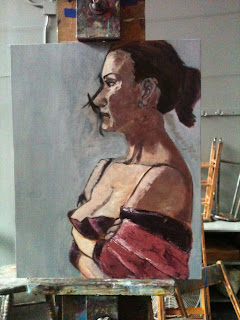 Ok so Im done. Finished better than I thought I would considered the debacle of the last three days. Yesterday MCK came by and laid some of my fears to rest-ish. She said that I wasn't that far off on the nose. She cut into the left side of the neck and it felt better, the head made more sense to me. She said that the ear looked better but still had to be at an angle.

After her critique I still felt like I had taken many steps backwards. I was frustrated and really worried that I would end up with shite after having done something nice. What really got me was that she said "maybe should you stop/start a new one." Ugh! That's the last thing I wanted to hear -- it just made me feel like this one was beyond saving. But it made me realize that I fell into an old trap -- that of thinking that I was going to leave with a finished painting. I should've not gotten attached to it, should've just kept telling myself that it's only practice.

Today, I was determined. Leaving it as bad as day 9 was unacceptable. My only goal was to get the nose/mouth to work. Was saved me was going back to drawing. I took my #1 bright brush and drew in the mouth/nose area and started attacking it almost from scratch.

I went back and got the colors in better on the shadow areas in the main part but also in the highlights of her face. I shortened the forehead that had grown as part of MCKs suggestion -- it just didnt feel right and I figured out why. The model had rotated so much that I was seeing a significantly different angle than the original. It's just not fair, man. (Im not blaming the model, but shouldnt things be easier for us?)

By the end, the edges of lines were working much better around the face, and the colors were working better with each other. All I really have to do now is make the background a more uniform color, and I believe that will make the figure really pop. At least I can stand to look at the finished product without having to set it on fire. It looks better in person - most art does - but I will post the finished painting sometime soon.

Now its time for sleep, I've homework to do for Porcu's class on Sunday. 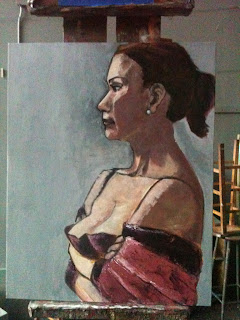 Email ThisBlogThis!Share to TwitterShare to FacebookShare to Pinterest
Labels: finishing