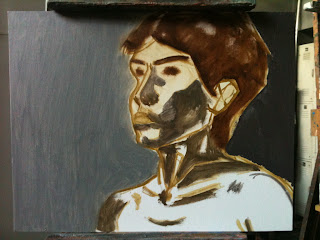 (Day 1)
Well I guess it's a portrait from the shoulders up! On the first day I just tried to get the drawing right, making sure that the contours of the face and hair matched as best I could. Added the darks right away and spent some time trying to get the color right, but I think I missed on that front. After that the background color had to come in right away as per MCKs training. She's standing in front of a curtain that's black and a wall that's grey hence the 2-colored background. From my angle, light is hitting the curtain making the black seem more like a violet. She's also wearing glasses which worries me because it just leaves that much more room for me to fuck this all up. 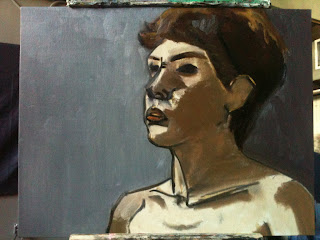 (Day 2)
On Day 2 my task was clear: get the colors right! I remixed the darkest dark but in writing this can't remember how I got there. The lightest light came in, and for that I used white with cerulean blue and some cad red and cad yellow. It was the blue that I was happy to see with me eye.

You can also see me redrawing with my black lines, making sure that I'm getting in all the major shapes that define her. By the time MCK came around she said to simplify the dark pattern (I had another reflective light on her neck area but the squinting trick made them disappear so she painted it out). I told her I was worried that I was way off on the color and she didn't think so. She added a bit of yellow ochre to whatever color I had mixed to get the shadow.

Also, from this angle, the area from the nose to mouth and left eye is tricky and she said "yes it is." So I'm worried about that too, but last time I got to committed to thinking I was right or that I might fuck it up and I did anyway. So if I have to repaint an entire area fuck it -- I'll do it. I asked her outright, was the ear wrong. She gave a look and said "it doesn't bother me -- it didn't jump out at me -- I didn't have a problem with it when I looked at the painting" so that made me feel like I learned from my past mistake. (I made sure to put it at an angle, which I didn't do last time.)

All in all not a bad couple of days. There's something about this painting, even at this stage, that looks like it has more weight or something...right?
Posted by rudy at 4:59 PM