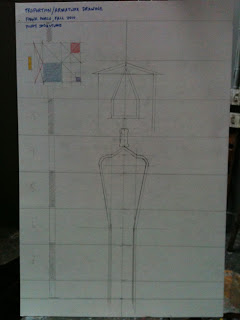 Frank Porcu is doing exactly what he should be doing. If he were doing ANYTHING else in life we would all, as a society, be suffering for it. Such is my brief intro into the most amazing class I've been to since my time at Brown.

I missed the first class but my friend tells me that people had purchased the wrong materials so Porcu just lectured, and after having seen him lecture today, I'm sorry I missed it.

People have told me (friends, artists, and teachers) that if I ever really want to get serious about painting I need to take a sculpture class. More specifically it was Dan that put me on to anatomy with Porcu. I avoided it because it was something out of my element, seemed difficult and technical, and was on Sundays.

Within 3 minutes I knew that Porcu was something special. His energy for teaching about something he loves and respects shined through. He was able to instill in us the importance of artists to learn anatomy by tying us into the history of human anatomy and art.

He talked about the Ancient Greeks, Romans (Galen), and then Renaissance artists. He pointed out how it was artists that began to investigate the medical knowledge of the human body so that they could more accurately render the human form in their commissioned work (Da Vinci etc.) But what got me was that he knew all sorts of legal history about dissections in England and the U.S. (Laws had to be made because medical students and artists were purchasing black market, freshly-dug cadavers for educational purposes.)

Note about Porcu -- he was drawing, in 60 seconds, various scaled renderings of the human body fully depicting skeletal and muscular structure. He would show us the human thigh, then show the same portion rotated in a different way -- then show us a cross section depicting the femur in different parts of the muscles etc. He's an anatomical encyclopedia. His brain should be indexed and searchable -- www.porcunet.anat or something. He knew exactly what textbooks incorrectly depicted the human form and why. He teaches med professionals on human anatomy and DOES HIS OWN DISSECTIONS. Fuckin wow.

It seems that this class is providing me with the base knowledge that (a) I knew that I lacked and (b) have always wanted in spending time in art school. Today I learned that the general human body is 7 1/2 heads long and from this one measurement we can draw, to scale, a good representation of the body. I have heard and seen this before over the past year but I just didn't see the point. It wasn't explained to me. It was just a fact with no context. Porcu made it come to life in a practical manner.

OK so this class is going to produce a scale écorché model of the male human body. We didn't break out the clay today but spent the rest of the time drawing our armature for use in the next class. It is highly technical and you can see the beginning of my drawing in this post. Next week we start to bend the wire and construct the armature for the model. I'm exhausted. 10am - 4pm straight. No break. No bathroom. "I don't wanna stop cuz Im on a roll," said Porcu. Next week is gonna be great =)
Posted by rudy at 11:09 PM