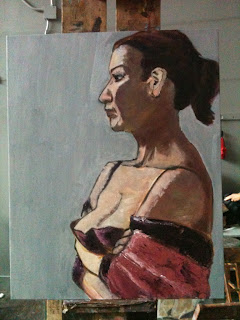 Tired from Porcu's class, I managed to get to class two poses late, but wasn't going to miss it -- MCK comes in today. She was already critiquing other people when I set up and I knew I had work to do before she came over to me. I needed to get to work on the lighter part of the face and the shawl.

I tackled that first, mixing up the lower part of the shawl and applying it directly with the palette knife. The lady next to me kinda gave a look like "uh-oh he mighta fucked it up" but I knew where I was going with this. I had done the top part and this wasn't going to be a problem. So I set all the lower shawl colors in, and then mixed up some flake white and applied highlights.

It's true what I've heard/read/seen about palette knifes, you get all these "happy accidents" (oh man, is that a Bob Ross reference?) that otherwise wouldn't be possible. Now the shawl looks like it has a lil' flower pattern to it. It read so nicely that I chose to do all the clothing like that.

I then set out to add more variation to the lighter parts of the face. I looked and looked at her closely and could see that the truly white highlights did not cover as much area as I had on my painting. Mixed cadmium orange, white, cad red, and light red to get a really light skin tone to add to the forehead, nose, mouth etc. Didn't want to overwork what I had because that usually leads me to trouble, so just a few touch ups and on to...

The darker background made the highlight immediately work better, which left me with less work to do on them. And then there was MCK.

She looked for a bit and then said, "this area here is good" motioning below the neck and to the chest. "I think you're long in the nose." (Right before she came over I had started to reshape it). But the problem in the nose lead to her other comment -- the ear. It's to high on her head and should be more at an angle. I couldnt really see it, but I think if I had used a mirror like she ALWAYS suggests then perhaps I would. This was the first time I wish I used one, so perhaps soon I will.

Anyway, because the nose was off it also made the ear off because a person's ear ideally goes from the top of the eye to the bottom of the nose. I'm afraid to completely redo the ear, but it's the worst part of the painting so something has to be done about it. I also remember that towards the end of "Blane" the ear had me troubled but I somehow managed to sorta get away with it.

Today was the first day that a few people said something about my painting:
"Power, that's power"
"I like it, it's real dramatic"
"I was just admiring you're painting, and I didn't know it was yours" (that one was cool)

Renee talked to me about it and said that she thought it was really coming along, also mentioning the drama part. (I think that's a funny comment because I'm just tryin to paint what's in front of me.) But having seen all my previous attempts at painting I like that she said that though the style is changing it's still retaining an abstract quality and structure. "It's good that you haven't lost that," she said.

Tomorrow I attack the nose and the ear.
Posted by rudy at 9:23 PM