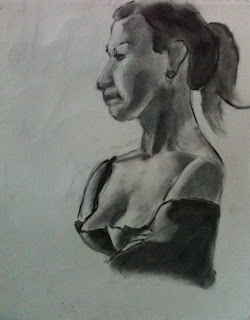 A friend from class asked me the other day who my favourite painters are. The first five names were all abstract/modern painters. When it came to figurative work I could name only a few -- Vermeer, Van Gogh (but his figurative work isnt classical) and Mary Beth McKenzie. (MCK)

I took her class over the summer and had to relearn anything I knew about painting. Being in Cenedella's class allowed me to gain the confidence to sign up for MCK, but I signed up wanting to learn from her. I admire her work -- it's unparalleled in current figurative work. It evokes feeling, emotion, sadness. Her paintings are active. I am a viewer of her paintings but I can hear them speak -- they are talking, speaking their own language, and I get to listen in.

So we finished the first pose last week and I came up with the first painting that I think finally incorporated some of the qualities over which I have been agonizing (below). (You can see the agony in its entirety by looking at the "in progress" albums in my picasa public gallery)

In her last critique MCK said "this is better for you" and aside from sounding great, I believed and realized it was true. I didn't show her the final version today, don't know why, but probably will on Thursday.

Anyway, today was the first day of the new pose/model. She is dressed in a long dress that looks like something from 19th century Mexico, and her pose, to me, seems like she is some woman "waiteengs for Zorro to com and rezcue me plees." Know what I'm sayin?

No painting today, just some thumbnail sketches and the charcoal drawing you see above. Was just trying to figure out what exactly to paint for tomorrow. "That's exactly what you should be doing," said MCK. Today was the first day that "making a simple color study" made sense (I've heard her say that to people). I probably wont - probably just start the painting.

Lot's of shadows and stark highlights on her as you can see. I chose this angle purposefully, to contrast with the previous model which was flushed with light. Was so discouraged at first, just wasn't getting it to work at all. Little by little I started chipping away at it, using the charcoal and kneaded eraser to sculpt the image. I could hear my teacher from last year, Robert Cenedella, telling me "separate darks from lights -- the only reason we think that this area is lighter is because what's right next to it is darker." The best practical example in the drawing above is in her neck, breast and bra line. We shall see how it all develops tomorrow.
Posted by rudy at 11:58 PM