Day 3 - Squinting My Way Through 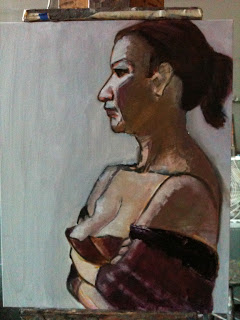 MCK was in today and I was basically waiting for her critique, but I felt like I had to push the painting forward enough so that she could really get in there and let me have it. I kept trying to get the colors a certain way and had been vacillating between two mixtures all morning (mentioned in earlier blogs). At one point the shoulder looked violet and the neck/cheek looked green. I decided to leave it like that so I could ask her how to (a) see the color properly and (b) mix it.

In the meantime I painted in the parts that were made obvious to me by yesterday's redrawing. Also, this model moves A LOT. Within the same pose she'll rotate her body which just makes it frustrating. So I needed to make a decision with her shawl and tackled the top fold by using my palette knife. I had done an entire painting just with the knife over the summer, but this is the first time I had thought of using the technique along with brushstroke. I thought if I could just get the impression of the shawl and worry more about the details of the face/chest area that would suffice.

So when MCK comes over I start by showing her how "Blane" turned out. She looks at is and says, "Im confused by this part," and was gesturing in the area of his right shoulder/chest/clavicle. "It seems like you spent more time here" (indicating the face). "Anytime you have a part of you're painting that's confusing it's bad."

I liked it! I wasn't dejected or angry like for real. I mean I was totally surprised by her comment but wtf that's why Im in her class -- to learn! So I took her comment and fuckin loved it because Im going to make nothing else "confusing" again. This past summer I wouldve been fuckin crushed! But this time it was totally different. It was a great observation that I kinda sort saw but not really. On to this painting...

Off the bat she wanted a bit of a sharper angle on her left shoulder (which I had noticed but was real hesitant to try and fix myself but will do tmrw). She then basically said that the cheek/neck area had too much going on. I asked her about colors and she said that the funny thing about painting is that you can see almost any color on anything. What concerned her though was that the area was too busy, it needed to be simplified -- "to be more flat" she said.

She took the brush, quick mixed some dark greenish tan colors with whatever was on my palette and just brushed the area away. I had thought of this initially but was torn with getting all the nuance of light on the model correct. I thought she would think the one big dark-shaped block would by too elementary. Then she said:

"Try squinting and looking at the model. When you squint you get a good sense of the major shapes in the figure...Now squint and look at your painting. Are you getting the same shapes?"

Fucking wonderful! I had heard or read or been told this last year at some point but it never really clicked. I've noticed that there are tons of little art lessons that are like lil' sage Yoda sayings but, like Luke, how the fuck am I supposed to know which one is real. But this time the squinting worked! It got me to simplify the face area and some of the neck and the painting is working better.

Cool thing is that she didnt do much drawing on my work. Hardly any. Almost none. I thought that was a good sign, especially since I felt good about the work I put in on the redraw (though I'm still willing to let it go if it so warrants). Some lady asked if MCK put in all those lines, and I said "nope I did them."

Also, I kept looking at her shoulder and highlight and I could hear the voice of Cenedella saying, "If something's working DONT TOUCH IT" Thanks, Bob, I didnt :)
Posted by rudy at 11:31 PM