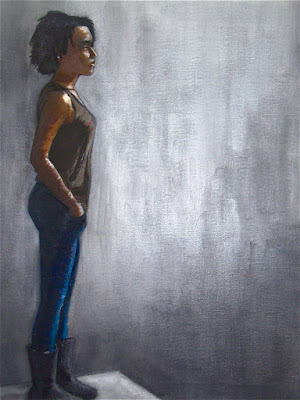 Ok, so after (and during) the self-portrait I couldn't really focus on another painting. So there was a model in between that time (I worked on her for 2 days) but it's all a haze to me =P That's why this one is called "mck winter 1" time for a reboot.

Anyway, when I finally recouped I had this model. I was going to do a standard waste-up portrait of her, but I couldn't stop focusing on her boots. So I decided to paint her entire figure. It's really the first time I've tried this since, i guess, the summer.

Part of me regrets this choice (because I saw how nice the other portraits of her came out) but I like that I got it done. Actually it is the most detailed-ish painting I've done but difficult to distinguish because all the features are smaller. Either way I'm glad I captured the pose and how funny the boots look on her.

Porcu's anatomy helped immensely getting her proportions accurately. I couldn't have done it without his class.